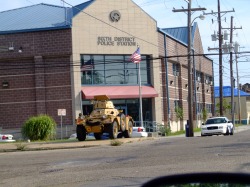 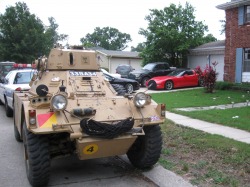 Interior of Valkyrie I

I'm Dave, proud owner of Valkyrie I, my Ferret Mark 2/3.
The Daimler Ferret was an armored scout car used by the British military from the early 50's to the early 90's.  About 4,500 of these vehicles were built and they were used all over the world.  My Ferret, 33BA34, served in Desert Storm (Operation Granby to the British Forces), this was the final mission of over 40 years of service to the Empire.  Recently I had a recomissioning ceremony and officially named 33BA34 the Valkyrie I, after the Nordic Godesses of the battlefield.
Here are some Stats:

The Mark 1 version was the scout car with no turret and an open or canvass covered top.
The Mark 1/2 had a small fixed turret
The Mark 2  had the standard turret that could turn 360', like mine.
There were several different Marks and many variations but the basic types are  no turret, fixed turret, and rotating turret.  In fact my Mk 2/3 began life as a Mk 1 and had the turret retro-fitted at some point in it's service life.

This site is still under construction, more pictures and stuff coming soon!

Please enjoy the photos, if you have any questions please contact me at dliang382@yahoo.com 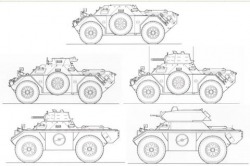